Now for something spectacular. This luxury flat belonging to a young Danish and Catalan couple is  a conversion of a 500 year old Sant Agustí convent building in a historic part of Barcelona. Here a magnificent monument of Gothic architecture meets purity of white tones and clean, modern furniture designs.

Elina Vilá and Agnès Blanch, two designers from the Spanish MINIM Studio, met challenges on this site, including quite bad structural condition of the building, and the question if to preserve only the original construction of the arches eliminating all the subsequent additions that occured throughout the centuries. In the end, due to their aesthetic value, all the elements added to the primary building were restored or, where necessary, reconstructed. The main aim was to revive the architectural beauty of the Gothic lines but keeping in mind the desire of the owners to create a neutral, minimalist space in a Scadinavian style, jazzed up by some high-quality modern furniture. The result – an interior that creates an unrivaled feeling of both grandiose and simplicity.

It’s worth noting that this space was once inhabited by Isabel Güell, the marchioness of Castelldosrius, and daughter of  Eusebi Güell, the patron of architect Antoni Gaudí. Gaudí actually did some restoration work on the housing and the oval gloriette that now serves as a children’s playground is of his own invention.

The living area in a rectangular shape is simlpy furnished. The Gothic arches and the stone ornaments are decoration in themselves.

Bright coloured furnishing has been added to provide contrast and an element of fun. The antique stone wash basin is suspended on the wall and goes with the original features of this space.

The entrance opens straight into a massive space that has been divided into living area and work zone.

The work area is cleverly separated from the main living space by plastic dividers that both let the light in and do not distract the vision.

The centerpiece of this entertainment area is the grey sofa built from square blocks that can be played with and rearranged according to one’s fancy.

In the background one of a few terraces in the house that open onto the main patio. 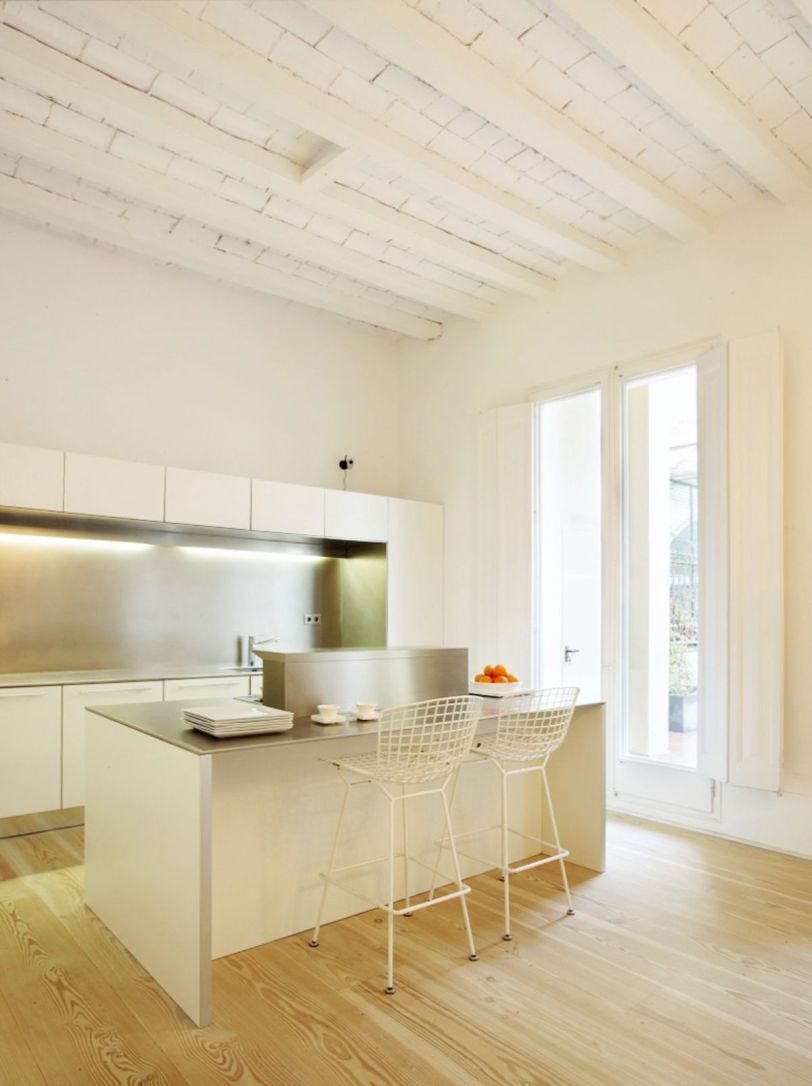 The kitchen is an open-plan area with an island in the middle for quick meals and breakfasts.

In the bedroom the emphasis has been put on receiving maximum daylight, hence very simple decor.

The bathtub has been fitted just opposite the bed, while the bathroom is also connected to the bedroom.

This oval pavillion was designed by Antoni Gaudí to hold organs. It now serves as a play area for the child of the owners.

4 thoughts on “Gothic Minimalism in Barcelona”